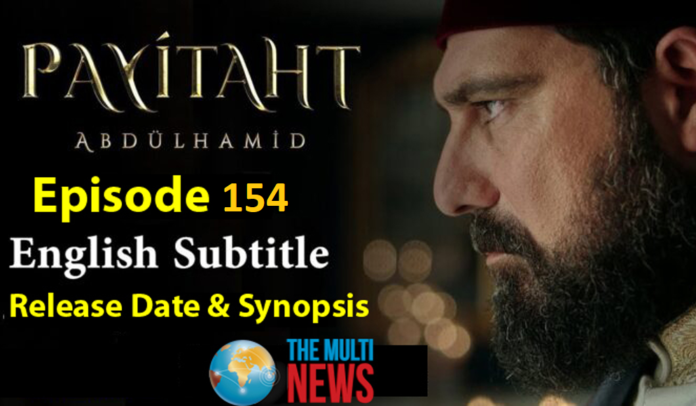 In Payitaht Abdulhamid  Episode 154 , Abdulhamid informed pasha about the meet up in Ravel that would be resulted in bad consequences. Fatima came to met with Aliye and asked prayers for her health. Shehzade informed that many rumors began to spread in Rumelia due to the meeting held by young Turks in Paris. Hunkar told that his people will be served to cease such rumors. At that moment, nazim delivered a message by the Grand vizier to Hunkar. Abdulhamid was informed that some betrayers and Esat had began a revolt in Rumelia and their demand in to reopen the parliament.

Mahmud wrote the names of the masons in a letter and send this to Hunkar. also, he said to Sabahaddin to find out these names of betrayers from the young Turks. Mary informed Zuhal about the completion of writing of her books and asked that now she is setting out for palace to meet with Aliye. Semsi was asked by Hunkar to investigate the situation in Rumelia. Selim wished to set out for Thessaloniki but he was stopped by Necip.

Hunkar told that parliament opening is quite earlier and also discussed about the changes that would be made in agriculture in Anatolia. Semsi visited many people and heard their opinions about the innovation in assembly.  After that, Semsi met with Nazim and find out the probable meeting places of the betrayers. Sabahaddin learned the names and told his father that he wanted. Even though Mahmud was not well but he wrote letter immediately to Hunkar. Mary met with Hunkar in the palace and told him about her book but she came to know that he already knew it from the starting.

Zuhal came to know that Aliye had woken up and tried to kill Aliye. Semsi came to that place that was told by Nazim with his troops and captured everyone. Semsi observed that the ink on the documents had faded away and therefore he began to learn the information written on the documents. The car of Semsi was stopped by one of the betrayers and gun fired him. Hunkar read the letter sent by Mahmud and came to know about the murder of Semsi. Hunkar commanded the assembly to reopen it to cease this revolt and terminated Tahsin.

Episode 154 will appear here with English subtitles after release

Episode 154 will appear here with Urdu subtitles after release