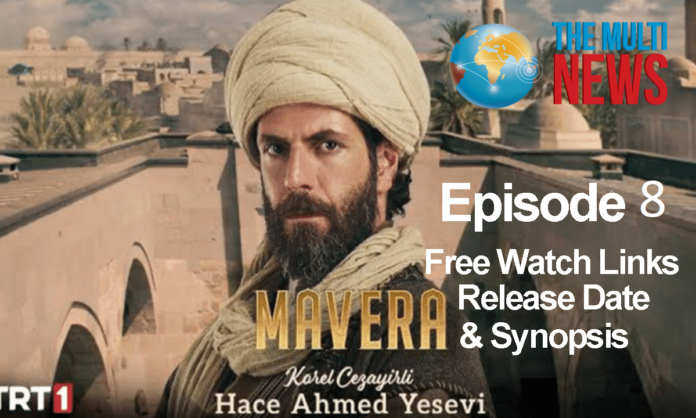 in Mavera Episode 8, Ahmad quarreled with Dubeys but surrendered so that nothing bad would happen to Asife. Dubeys said he would execute Ahmad and his friends. Dai found the wooden sword in Khwaja’s shop and began to think the legend was true. As Dubeys was about to kill Mahmud, Saltuk hit the hand of the executioner with an arrow and attacked Dubeys.

Meanwhile, Dai arrived and asked Dubeys not to kill Ahmad and even release him. Dubeys first objected, but after Dai told the legend of the wooden sword, he released Ahmad and Asife. Asife immediately returned to the palace and learned that her father was very sick. Pehlivan apologized to Leyla for what he said. The priest learned that he could no longer buy gunpowder and took back the barrels that he had put in Tarik’s shop. Ahmad returned to his shop and realized that someone had sneaked inside.

Dai crawled into a castle and started talking to three men. These three men asked Dai to whip himself for disturbing Sheikh. Dai said why he did not kill Ahmad after whipping himself and found the wooden sword. Saltuk dressed like a crusader and entered the camp. Saltuk tried to gather information about the powder kegs, but nobody said anything to him.

Mervan began to explain to those there why he expelled Ahmad from the lodge, but some dervishes were disturbed by what he said and left the lodge. These dervishes then went to the nomadic plain and told Ahmad what happened in the lodge. Ahmad then had a dream. Ahmad was in a well and asked Hamadani for help. Hamadani asked Ahmad to fight the devil, and then Ahmad freed himself from the well. After waking, Ahmad told the story of the wooden sword to his friends and told what was written on the sword.

Afreen - December 23, 2020 0
Uyanis: Buyuk Selcuklu Episode 14 Release Date and Synopsis and How to watch with English and Urdu subtitles Free of cost