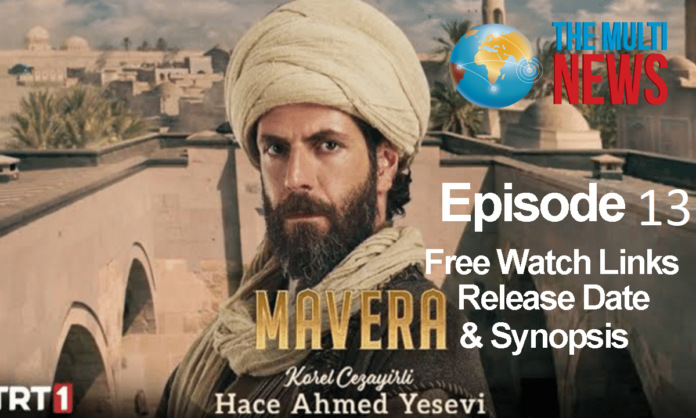 in Mavera Episode 13, Yalgiz accidentally stabbed Ahmed, but Ahmed did not tell anyone that he did this. Haje calmed his friends and went to the plain. Meanwhile, Atif’s soldiers destroyed the nomads’ stand in the market. Ahmed said his wound was small and learned what happened in the market. While Dubeys was examining his new troops, a man from Alamut secretly told the followers that they should take action.

Some of his soldiers said Dubeys was a liar and revolted, but Sedat killed them. Dubeys realized that what Nejat had said was starting to come true. Ahmed went to the palace and asked Atif to treat the nomads fairly, but Atif opposed him. Efkan said Akboru might have stabbed Haje, and then Mahmud went to the Salik neighborhood and asked Shahsuvar to find him. Ahmed did not give up despite what the soldiers had done and tried to sell the nomads’ products to the merchants in the market.

Haje learned that Mahmud was looking for Akboru and immediately took action to stop him. Mahmud found Akboru in an alley and started beating him, but Ahmed stopped him. Shahsuvar took Akboru to the Sazlik neighborhood and gave him clean clothes and something to eat. Yalgiz went to Ahmed’s tent. Ahmed said he hadn’t told anyone about the incident in the market and asked why he was trying to kill that man.

Yalgiz wrote on a piece of paper that Akboru killed his family years ago and wanted to take revenge on him. Yalgiz then took off the necklace made by Haje. Ahmed went to the market the next day and realized that the merchants were not speaking to him because of threats from a loan shark. Saltukh caught the pastor and disguised him. Mervan took action to kill the priest, but Saltukh stopped him. Atif’s soldiers arrested Haje and Mansur on fabricated crimes.

Zainab Yaqoob - April 20, 2021 0
Mavera Episode 4 | Release Date and Full Synopsis in Mavera Episode 4, Ahmad prayed with the nomads and set out to return to the...