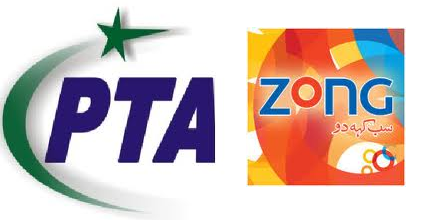 In a rather hard response to the fine slapped by the Pakistan Telecommunication Authority (PTA) on Zong CMPak amounting to $29.5 million (approx. PKR 4.73 billion). for the unauthorized and illegal use of some radio frequencies, Zong CMPak has served PTA with a notice claiming PKR 600 billion in compensation against the losses suffered by the company owing to a disturbed radio frequency band that the company had legally obtained from PTA.

Zong CMPak has stated that the radio frequency band issued to it by PTA faced many issues over the years which remain unresolved by PTA causing loss of revenue to the network operator. Not only that Zong CMPak has said that this caused their customer base to decrease due to poor quality of services in the regions with the disputed bands.

ALSO READ: Death Toll Crosses 9000 as Another 105 Lives Lost to The Coronavirus

This also led to a competitive advantage for other network operators as they possessed radio bands without any interferences allowing them to provide quality services in the region. Despite the challenges, Zong CMPak was rectifying things on its own. This was to provide its customers with the best services which lead Zong CMPak to invest highly in the region.

Instead of working with Zong CMPak, PTA has decided to turn to the legal route and served them with a fine even though Zong CMPak has been serving the country since 2008 and has made significant investments worth more than $2 billion.

Zong CMPak is also the first network operator to test 5G in the country. Our government needs to stop being hasty like FBR did with Jazz in the past month and work on communicating properly with the concerned companies before making a decision as it only causes more embarrassment for the country and may drive more investors away.

5G could be the start of an all-new era. Like all countries in the world, we’re in a race to secure 5G as soon as possible. The technology will allow for AI-based real-time activities. These include self-driving cars and AI-based traffic control systems. These are only some of the applications of 5G. It can be of much more usefulness to the country and will allow for a more connected world. Companies like Huawei are at the core of such technologies. Such measures against Zong and other companies could push back these tech giants that are investing in Pakistan.

Get amazed by the speed that 5G offers! 5G is designed to support a 100x increase in traffic capacity. But there’s more to 5G than the speed, it provides much more network capacity and a lower latency for a uniform user experience so that the data rates stay consistently high. pic.twitter.com/sB8Q2652as

5G will prove to be the pivot for the whole world. Countries with slow economic development will benefit the most as more and more users enter economic activity. Economic activity coupled with IT is surely the future for Pakistan.

Afreen - January 1, 2021 0
Kurulus Osman Episode 41 Release Date and Synopsis and How to watch with English and Urdu subtitles Free of cost