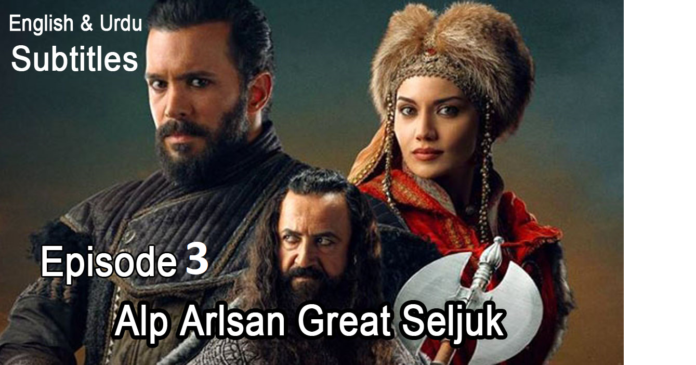 Sultan Alp Arslan Episode 3 , After Alparslan killed the Vaspurakan Governor, war broke out between the two states. Although the Byzantine soldiers were outnumbered, they lost the war against the Turks. Seeing that Liparit was captured by the Turkish army, General Dukas ordered his soldiers to retreat. Alparslan and other warriors immediately went to the palace. The Sultan congratulated his soldiers. Akca put a snake in Caghri’s bed and then killed the snake to save his life.

Karaca saw this and called the soldiers, but no one believed her. Akca then went to the forest and received the secret message sent by Kekaumenos. Akca was actually a Christian spy working for the Lord. Alparslan later came to the tribe and gave the news of the victory to everyone. Diogenes came to the palace to retrieve Liparit and accepted the peace treaty offered by the Turks on behalf of the Emperor. Alparslan then set out to take Liparit to Ani.

Lord took Liparit and, in return, gave a chest full of gold to Alparslan. The Lord said that the Turks in Vaspurakan will be released as soon as possible. Akca prepared medicine for Caghri and healed him. The General said that he wanted Diogenes to be the Governor of Vaspurakan, but the Lord refused this offer and gave this task to Yannis. Diogenes went to Yannis’ room that night and told him some things to kill the Turks.

Yannis sneaked into a room and sent a message to his father’s friend in the east to kill the Turks. The next day, Alparslan went to the meeting place in the forest to meet the Turks. When Akca returned to her tent, she saw that the necklace she had lost in the forest was there. After a short while, Hassan arrived, and Akca began to remember her childhood. Akca is actually a Turk who was kidnapped by the Lord years ago and is looking for her father. Alparslan continued to advance in the forest and saw that the Turks had been killed.

Episode 3 will appear here with Urdu subtitles after release

Nazir Hussain - August 7, 2020 0
A dozen of the French-Polish director's nominations had divided opinion in France, a country where the #MeToo movement that inspired women globally to put...