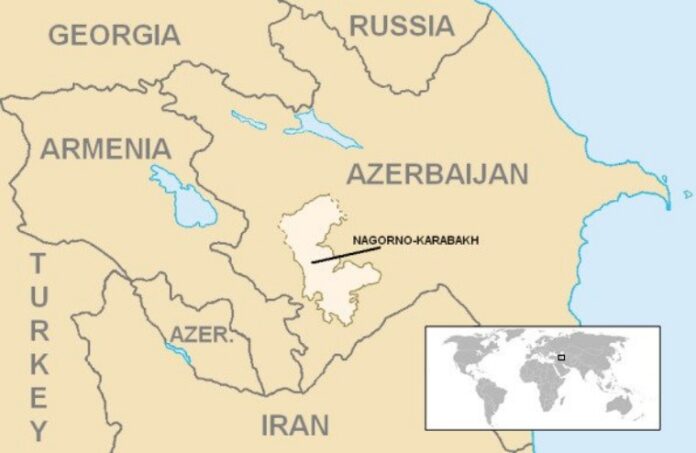 Since the end of the 1994 war, Armenia and Azarbaijan are again in the worse violence. Experts of international relations are predicting that the Nagorno Karabakh crisis can lead to the next global crisis. Because Armana and Azarbaijan are again in conflict since 1994. The controversial region is internationally recognized as part of Azarbaijan but the population of their region belongs to the Armenian separatist.No peace deal has ever been signed by both country Four resolutions of the United Nation security council have called on Armenia to call back its army but it has not happened yet.
Government officials of both countries blame each other for the current unrest near the line of contact(LOC). Azarbaijan claims that Armenia started an attach whereas Armenia accuses Azarbaijan of the attack. According to the resolutions of United Nations security councils resolutions, Azarbaijan has the right to claim its land by using any means.
International relations experts are warning that conflict between Armenia and Azerbaijan can result in a new global crisis. Armenia has imposed martial in its controlled area. Armenian authorities have announced the total mobilization of its army. While Azerbaijan has mobilized some of its forces.
Also Read: Talal Chaudhary and Ayesha Rajab Real Story exposed
In this war which fought between Armenia and Azarbaijan some of the countries are also supporting their ally. Turkey is supporting its ethnic kin in Azarbaijan.
Armenia has signed a Collective security treaty Organization with Russia. If turkey keeps supporting Azarbaijan in this war Russia can become part of it. Thus this conflict can lead to a war between Russia and Turkey. The worse thing about the Azarbaijan-Armenia is that it can either become a proxy war or a formal war. Some experts are saying that this war can lead to war between NATO and CSTO because Turkey is part of the transatlantic alliance.
The worse scenario is that the Government of the bother countries is not willing to step back. The Armenian Prime minister has said that Armenia can recognize the conflicted region as an independent Region. The movement of the military and the imposition of martial law in the conflicted area can lead to severe war.
Azarbaijan has accused Armenia of attacking the town of Terter that is located outside the conflicted zone.
While Russia is legally bound to defend Armenia but Russia will not do that. It is because of the fear of western sanctions. The ongoing war between Azarbaijan and Armenia can cause to worst-case scenario between CSTO and NATO.
Observers all over the world are hoping that a creative will be proposed soon. The proposed solution will be acceptable to both countries. This week is vital to determine what will prevail either peace or war.