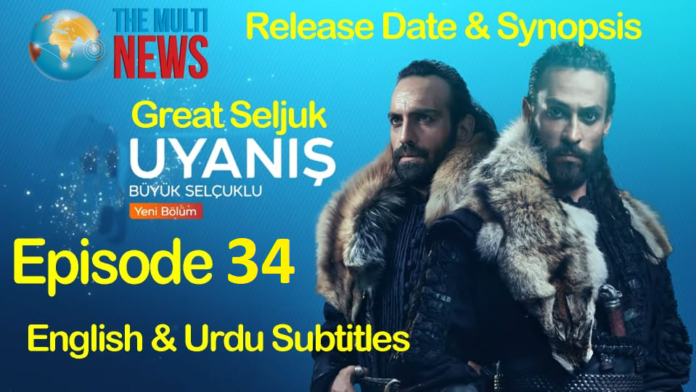 In Uyanis Buyuk Selcuklu Episode 34, Turks were attacked by Mitras as he thought that his plan will work. However, malik shah reached to save his sons. The sultan got injured but in return, he also injured Mitras severely. When Hassan and Mitras came to know that they will be defeated then they ran away. Ali broke the strings and got out of the cave. Ali was saved by Melik shah and he also saved the supplies for Greek fire. Sanjar’s father and Ali were taken to the plain by Sanjar. Basulu made a unique medicine for Sultan.

Mitras came to know that Ali and the materials for Greek fire were rescued by the sultan. While Hassan predicted that a new issue would be created. Later, Hassan visited the brother of Basulu and told the wrong things about Sultan him. Baturalp told that he had come to the plain to take his sister. sultan had forbidden him but Baturalp said that he will follow his traditions. Melik Shah told that when they will be able to resolve the issue then they attack Kuvel.

Baturalp told that Kipchaks would assault if he could not bring Basulu. The soldier of Baturalp was killed by Hassan with the arrow of Seljuk that night. Baturalp came to the plain quickly and informed about the beginning of the war. Sanjar was failed to save his father. Melik shah came to know that Baturalp had begun a war and called the Basulu to the palace.

Tajul was ordered by Terken to cease Basulu by bringing the soldiers of Karakhanids. Basulu decided to return to the lands of Kipchak due to which all that occurred. Terken called the soldiers in the jungle but Zubeyda arrested them and felt that she was a betrayer. When Baturalp with Basulu was coming back home, they were attacked by Hassan. Hassan attempted to murder Baturalp but the sultan reached there and ceased him.

Episode 34 will appear here with Urdu subtitles after release

Afreen - March 15, 2021 0
Payitaht AbdulHamid Episode 143 Release Date and Synopsis and How to watch with English subtitles and Urdu subtitles Free of cost.