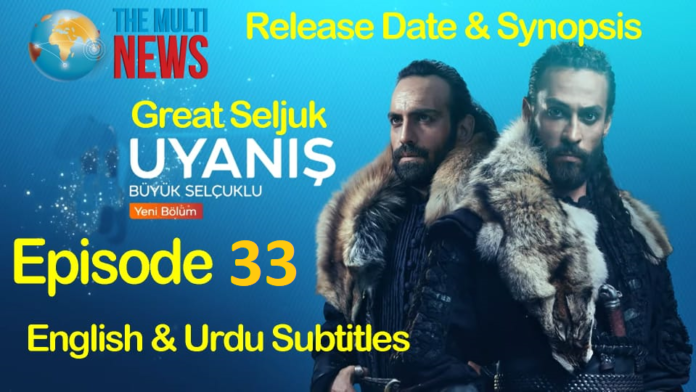 In  Uyanis Buyuk Selcuklu Episode 33, Sanjar proceeded to assault the city. Sanjar was attacked by the soldiers of Hassan. But Tapar came to rescue him. Shortly, Turks came into Shalamzar. Hassan ordered his soldiers to assault the Turks. However, Tapar and Sanjar felt that they were about to die in the city. Melik Shah reached to rescue them. Batinis were defeated by the army of the Sultan. Sanjar killed Faysal to take revenge for his friends. Shalamzar was taken back by Sultan. Sultan asked Turan to bring him to his lodge as a prisoner.

Terken argued with Tajul. Meanwhile, she gave birth to a son. Eighteen months were completed. Sultan planned to assault Kuvel and thought of calling a meeting on this matter. Quickly, Nizam, Tapar, and Sanjar proceeded to take this meeting. Terken met with her loyal soldiers in the jungle. She asked Tajul to do the work assigned by Sultan. Tajul informed the sultan about his planning for the attack but Sanjar did not like his plan.

Melik shah also got furious with Tajul works and Sanjar was assigned this attack. Nizam said Sanjar to make a workshop in the jungle. He also asked Ali to take supplies. Hassan reached when Mitras was building the fortress. Tajul was asked by Terken to arrest Ali and his supplies to injure Sanjar. Hassan was informed by Tajul about Ali. Tajul and Hassan arrested Ali and his items.

Ali was tortured by Mitras. Mitras tried to know the attack plan of the Sultan. Nizam felt that someone is a betrayer in the palace and informed the sultan what had occurred to Ali. Melik Shah was furious with Tapar and Sanjar. Hassan wished to put the trap in the south of the jungle away from the tracks. Tapar and Sanjar chased these tracks. Mitras considered that he had captured them so he assaulted them however, Melik shah knew that it was just a trap. Mithras was attacked by the sultan and his army.

Episode 33 will appear here with Urdu subtitles after release

Afreen - March 27, 2021 0
Kurulus Osman Episode 52 Release Date and Synopsis and How to watch with English subtitles and Urdu subtitles Free of cost