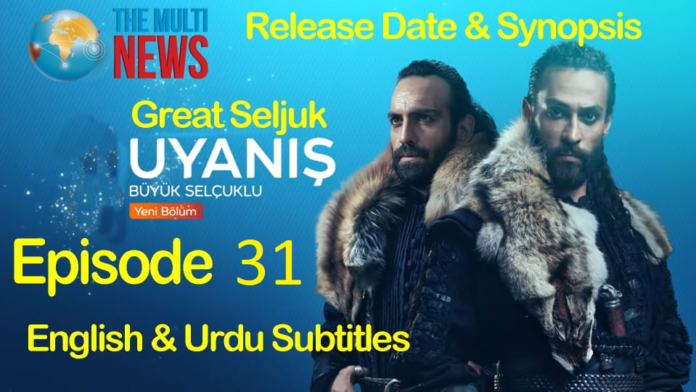 In  Uyanis Buyuk Selcuklu Episode 31, When Melik Shah with his army was going to assault Shalamzar, then Tekish ceased him and informed him that he had already taken control of the city. Sultan examined the situation of the city and asked that now this city owns by Tekish. Tapar was worried about the decision of his father.  But the sultan urged him to focus on the attack on Kuvel. Sanjar came back to the plain and informed Nizam about the decision of Sultan. Sanjar with Nizam and his mother moved towards the palace. Melik shah talked to Nessac and explained his plan.

The sultan said nizam to get back to his responsibility and informed him that Melick would be declared by Sanjar.  later, the Sultan conversed with Basulu and began the celebration for Sanjar to make Melik. Sanjar got his sword from Nessac and take an oath to serve his state. When the ceremony ended, Turan told Melik that the decision of Shah was wrong. However, the Sultan agreed that Shah took the right decision.

Turan was departing the palace. Then he informed Tekish about his decision.  Turan asked him that the next day he would get his throne. Tapar was provoked by Gevher and he went out to assault Tekish.  Sanjar tried to stop his brother and informed his father about the whole incident. Tekish said that he must provide the Greek fire to Sultan. however, Mitras pressurized him. Tekish convinced Mitras and supplied the Greek fire to Sanjar. When the Sanjar was taking Greek fire, then the soldiers of Sabbah attacked him.

Yet Sanjar fought back and murdered them. The soldiers of Turan were getting ready for the attack, Mitras told his plan to Tekish.  Tekish said to Hassan that Sultan would be attacked by Mitras. meanwhile, Turan arrived and indicted him of being a betrayer. But later he agreed to what Hassan had informed him and accepted to work with them. although Mitras was holding back to assault Sultan. Meanwhile, Turan assaulted the palace. But nobody was found there. The Sultan went out from the shelter and told that he had arrested the betrayers.

Episode 31 will appear here with Urdu subtitles after release

Afreen - March 8, 2021 0
Payitaht AbdulHamid Episode 142 Release Date and Synopsis and How to watch with English subtitles and Urdu subtitles Free of cost.