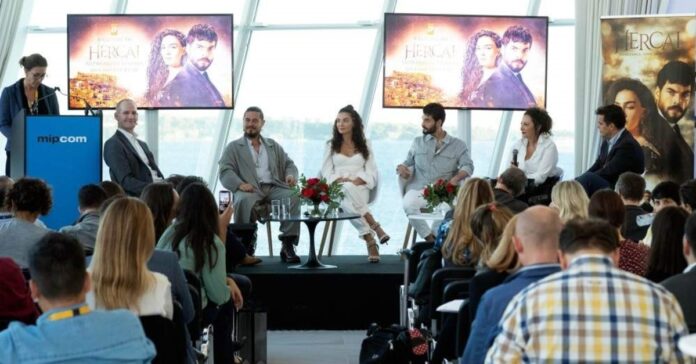 Conveying a huge traditional value, Turkish drama series after grabbing attention around the world are now being showcased at the world’s largest content expo MIPCOM.

The ATVs outstanding productions “Hercai” and “Kurlus Osman” have swept the festival.

The expo is being organized in the Cannes—a town of France. An ATVs standard-setting series “Hercai” was at Cannes with the entire cast. The cast attended the Q&A and networking session with the visitors and embraced the love and the respect of their fans.

Leading actors of the series Akın Akınözü, Ayda Aksel and Ebru Şahin, and the directors Cem Karcı and Benal Tairi, who was accompanied by AtresMedia’s head of sales and acquisitions, attended the session.

Another series “Sıla” and “Sen Anlat Karadeniz” got an enormous number of fans around the world and was presented at the Cannes.

ATVs new series “Kurlus Osman” was also the centrepiece at the fair. An Ottoman-style tent was mounted at the garden of Le Grand Hotel as a symbol which drew exceptional attraction for sectoral pioneers, visitors, and the international press.

At the launch of this tent, the producer Mehmet Bozdağ described that their ancestors built the marvellous empire from the tiny tent. He said, “The Ottoman” would tell the story of how an empire was established on the concepts of love and devotions.

However, 7,000 to 10,000 of visitors are expected in the coming days by the organizers. According to the statement by Istanbul Chamber of Commerce (ITO), a chamber has organized a trade delegation with the help of the Trade Ministry to attend the MIPCOM expo. This event is carrying out all its activities gleamingly and will end on 16 October.

Afreen - June 24, 2022 0
Destan TV Series Season Two| Release Date And Synopsis  Destan revolves around the story of Akkiz and Batuga who developed love feelings for each other....

Joaquin Phoenix is ​​pleading for animal rights in the Academy Awards...