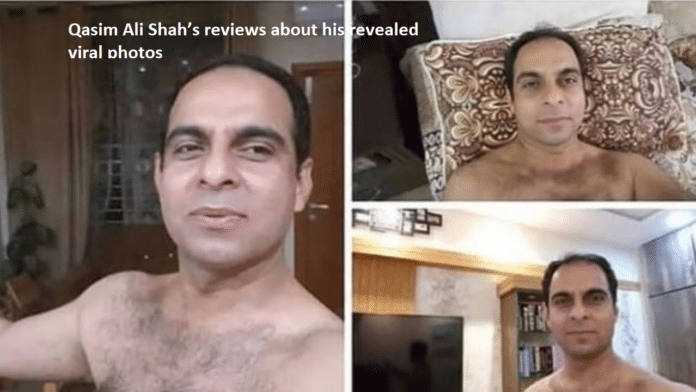 Qasim Ali Shah’s reviews and talked about his viral leaked pictures.The motivational speaker of Pakistan Qasim Ali Shah gave his reviews about his viral half nude photos on Sunday. These photos are currently trending on Twitter and other social media sites. Many shirtless pictures of shah were rounding on the internet and many users are claiming that some other improper photos and videos would be shared on the internet in the upcoming days.

Qasim Ali Shah has cleared the public about his topless pictures that were uploaded on Saturday. In a video message, Qasim Ali cleared that those pictures were from his data and are uploaded on the internet after being stolen from his mobile phone. He revealed in his video message that the selfies were taken 4 years ago at his residence.

With a blushing face, talking about this issue, he said “it is hoping that more improper photos and videos will be shared on the internet”. He cleared that those pictures will not come people are waiting for. He said he use to wear Dhoti and a vest when he is at his residence staying inside.

The educationist also said that he and his family got amused after reading some comical comments about the upcoming photos.  He said that he had been approached by the cybercrime wing of the federal inquiry agency and submitted an objection for further course of action.

Afreen - January 28, 2021 0
Uyanis: Buyuk Selcuklu Episode 19 Release Date and Synopsis and How to watch with English and Urdu subtitles Free of cost

Obamas studio is landing an Oscar documentary for ‘American Factory’

Returning Passengers Bring Over Coronavirus From The UK