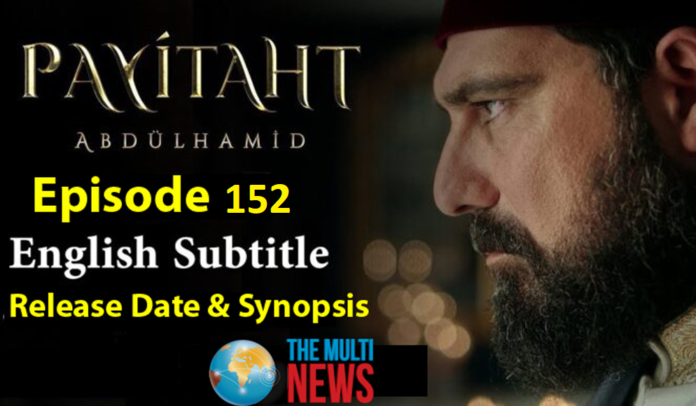 In Payitaht Abdulhamid  Episode 152, Hunkar talked with Hussein in his house. Tahir informed that somebody was trying to murder Hunkar. The hidden man in the closet was injured by Ahmed Nuri in his shoulder and arrested. Hunkar came back to the palace and came to know that Esat was captured by Tahir. Hunkar moved to the tent to inquire Tahir. But Tahir did not tell to Hunkar anything. Palmer said that he would tell better news to Karasu. Meanwhile, Palmer was informed that the assassin was captured.

Karasu was talking with palmer when Nadir and Soghutlu saw him. Hunkar met with Saliha and inquired about the matter. Later, the assassin was questioned by Abdulhamid. Necip asked the man about Selim. But he did not tell anything Hunkar therefore, he commanded him to be hanged. Instantly, Necip asked the man to tell him about Selim so that he would set free. The doctor of Hussein was called by Palmer and supplied him a bottle of medicine.

Hunkar was informed by Soghut what Karasu had committed. Mahmud called Karasu and asked him to communicate about the dealing of the castle with Sabahaddin. Abdulhamid came to know that Karasu was dealing with the castle so Karasu was called by Abdulhamid in the palace. the doctor of Hussein received permission to communicate with the boy from Tahsin. Hussein took the medicine from the doctor. Palmer planned a new murder sequence and went out to purchase a shop in the lodge.

Hunkar inquired Karasu about the property that the lawyer was selling and demanded help from him. Talat sent a ship for the escape of Mahmud. Necip with the killer came to the house and Selim was rescued. Nadir Aga wanted to purchase the mansion from Karasu. Karasu was captured by Hunkar and Selim told him that Karasu was an architect. Hunkar came to the lodge to spend the holiday. Shehzade felt wrong therefore, he shot the person beside palmer. However, Ahmed Nuri was fired by palmer.

Episode 152 will appear here with English subtitles after release

Episode 152 will appear here with Urdu subtitles after release