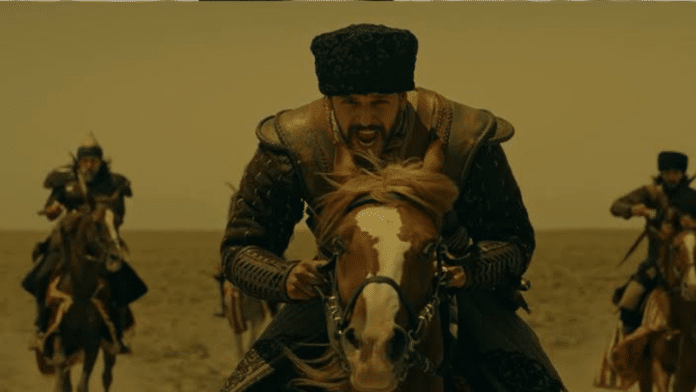 Jalaluddin went to the battlefield and started talking to Turkan. Jalaluddin told Turkan to stop, but Uzlagshah opposed him. Jalaluddin offered to fight Uzlagshah one on one instead of fighting the two armies.

Uzlagshah accepted his brother’s offer and attacked him. Jalaluddin defeated his brother. Meanwhile, Najm al-Din Kubra came to the battlefield and asked for a tent to be erected.

Najm al-Din Kubra then invited Turkan and Jalaluddin to this tent. Najm al-Din Kubra explained to both sides why he needed them not to fight. Turkan came out of the tent and told her soldiers that it was no longer necessary to fight.

Turkan then went to the palace with Uzlagshah. The Sultan greeted Turkan in the garden of the palace and said that they will hold a celebration that night. Najm al-Din Kubra told Jalaluddin to be careful about what will happen at the palace.

Behram learned that Jalaluddin had stopped the war by using Najm al-Din Kubra and was very angry. Behram heard that Uzlagshah attacked his brother and secretly sent him a message.

A Mongolian spy went to Behram’s shop and told him that someone was trying to kidnap Kutlu’s brother. Behram said he didn’t know anything about it, but that he would play a new game using Uzlagshah.

Spy asked Behram for a soldier’s uniform and left the shop. That night, Sultan started eating with her family. During the meal, Turkan started thinking about how to send Kutlu from the palace. Uzlagshah found the note under his glass and then sneaked out of the palace to meet Behram.

Jalaluddin met with Najm al-Din Kubra and listened to his advice. Behram said he wanted to make Uzlagshah the new crown prince, or even the new Sultan, but Uzlagshah did not believe what he said. After dinner, Turkan gathered her supporters from the palace in her room and told them that they would set up a secret army in the city.