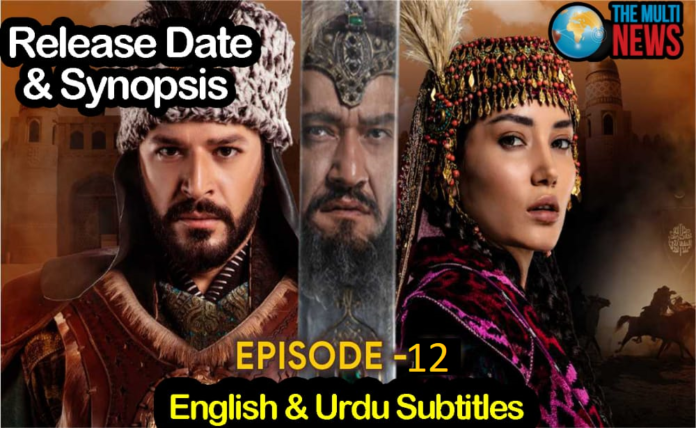 In Mendirman Celaleddin Episode 12 , Jalaluddin learned that Kutlu was working for Genghis as a spy. Kutlu told that she wanted to protect her brother that’s why she was working as a spy. moreover, she also revealed that she loved Jalaluddin and did not want to murder him. Jalaluddin got furious for Kutlu’s dishonesty but he learned what Kubra asked. Jalaluddin approached the lodge and there he assaulted Behram.  But Timur ceased him for doing this. That night, when Jalaluddin was sitting in the palace’s garden, his father came there.

Alauddin inquired his son about his anxiety and listened to his problems. Jalaluddin told his father that the brother of Kutlu was arrested by Genghis. Alauddin asked his son Jalaluddin to find a fox close to a hotel in Samarkand. Alauddin told him by using Tukhtav he could bring back Jahangir. That morning, Jalaluddin with his guards began his journey.  Aycikcek came to the room of Kutlu and came to know that the son of Kutlu departed the palace soon. Timur resumed to inquire Behram and asked him about the ring.

Timur felt that Behram had gulped down the ring in his stomach. Uzlag’s father received a message from Uzlag that he conquered over Subutai. Although, the Viziers were pleased to hear this Timur told that Turks would be attacked by Genghis. Turkan knew what Uzlag had done and is very pleased. Turkan informed that Jalaluddin had departed the palace and searched to know that where he was moving. Shamsiddinbek saw Behram in the lodge and tried to communicate with him but the soldiers of Timur did not permit him.

Shamsiddinbek informed Turkan that Behram was wanted to acknowledge something. Jalaluddin moved to a hotel and the fox also reached there. Jalaluddin told that he was in search of Tukhtav. The fox said that it was very difficult and threatening to search for that man but Jalaluddin convinced him to move to the jungle. Behram gave the ring to Timur and Timur with his ring moved to the forest and stayed for Jalaluddin there. Subutai told that he had not completed his mission and moved to the base of Mongols. Genghis said Jochi his son that they would assault Turks.

Episode 12 will appear here with English subtitles after release

Afreen - January 13, 2021 0
Uyanis: Buyuk Selcuklu Episode 17 Release Date and Synopsis and How to watch with English and Urdu subtitles Free of cost