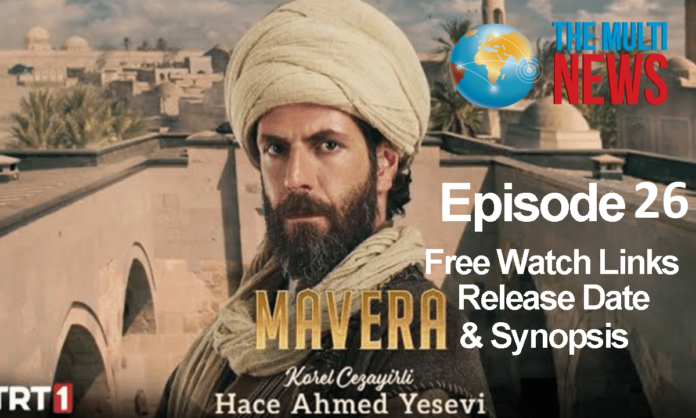 In Mavera Episode 26, Ahmed was astonished to see the knife in the hand of Aytolu. Aytolu informed that Ahmed was a rival. Ahmed forbidden this and he showed him a handkerchief given by Aytolu. Aytolu ceased by remembering what infidel had told her. But after that, she thought about what Dai had informed. Ahmed was attacked by the knife of Aytolu and Asife tried to stop her. Aytolu got injured and died later. Nomads and Ahmed took the responsibility for the burial of Aytolu. Asife confessed in front of Haje what he had done but Ahmed told him that she was virtuous.

Dai came to know that Aytolu was not successful in his mission and told that despite anything he would murder Haje. Asife told that she always missed Haje and said goodbye to Haje before she departed for Baghdad perpetually. Leyla wished to purchase new houses in the city in return for her all reserves. She bought the bouses for nomads and gifted them.  Aytolu said some odd things before her death and Mansur informed Ahmed about these things.

Haje believed that Saltukh could comprehend all these words so he called him. Saltukh informed that Aytolu had told all the things about the spies of Seljuk. Saltukh came to know about the secret letter of his father through these messages and interpreted his final message. Instantly Saltukh and Haje visited the caliph in the palace and informed him about the hidden place of Dai. After listening to them, the caliph said that he would cooperate with the state of Seljuk so that he could protect Baghdad from Dubeys.

Saltukh set a fire to indicate other secret agents. The headquarters of Dubeys were attacked by Saltukh and soldiers of Seljuk. Atif was captured by Saltukh and he murdered Atif. However, dubeys ran away. Dai was killed by Haje and his companions. Later Haje came back to the plain and said goodbye individually to everyone. His friends were given a small sword of wooden by Haje and set out for a tour with Alboru, Mansur, Yalgiz, Saltukh, and Shahsuvar.

Episode 26 will appear here with English subtitles after release

Episode 26 will appear here with Urdu subtitles after release