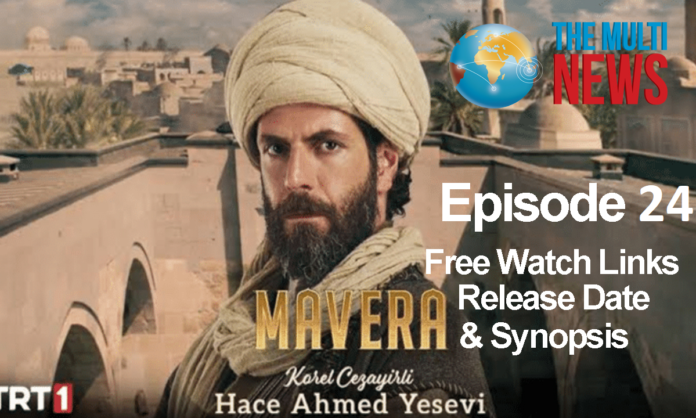 In Mavera Episode 24, Many people died in the nomadic plain and Ahmed prayed for them and went to the graveyard. Haje commemorated his companions and set a sword of wooden in their graves. After the bloodshed, Yalgiz started to communicate and his wound was cured by Akboru. Saltukh told the good deeds of Almas. Asife talked with Haje in the plain. Khutluk was weeping for his children and was worried about Aytolu.

Leyla was gathering her all possessions when she saw the handkerchief given by Pehlivan so she wept. Then, Haje came back to the spoon shop. Some traders visited the spoon shop and gave condolences to Haje. Haje asked them he did not mean to disturb anybody and therefore, he set out to the dervish inn. There he was welcomed by Shahsuvar and asked him to separate himself for a while. Dubeys was preparing his soldiers for the attack.

Atif told that he would meet with the caliph as an agent to discourage him. Dai considered that Infidel was hiding something that’s why he inquired him again and again but the Infidel did not tell him anything. The caliph came to know that the soldiers of Dubeys have surrounded the city. Haje asked the dervishes to strengthen each other. At that time, a soldier informed Haje that the caliph wished to communicate with Ahmed.

Aytolu was brainwashed by Dai because he wanted to utilize her for his purpose. so, he removed her memory. Infidel said to Aytolu to bear the hardships and recalled only good moments. Haje came to the palace and saw Atif as a delegate. Atif said if the caliph resigned from his throne voluntarily then, dubeys would stop to kill and loot the city. Aytolu was continuously tortured by the soldiers of Dai. Haje told that he was leaving to communicate with dubeys. Mansur also wanted to go but Ahmed asked him to stay there and left.

Episode 24 will appear here with English subtitles after release

Episode 24 will appear here with Urdu subtitles after release

Afreen - May 22, 2022 0
Click here to read full news about Barbaroslar  Episode 33 and Release Date free of cost here and watch it later