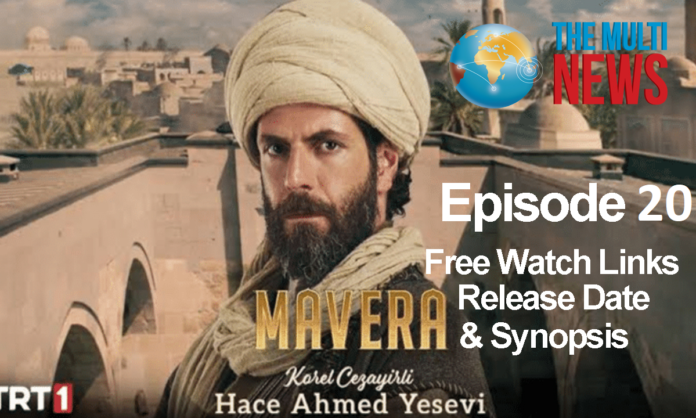 In Mavera Episode 20, Ahmed asked to ready a room for the caliph in the dervish lodge. Asife told that to protect his father from Atif she fled from the palace. Nejat talked with Leyla and took a drink. Nejat said that he could not trust anybody. Atif informed that the caliph was kidnapped by Asife from the palace and he got furious with his soldiers. The soldiers came to know that Asife took the caliph to Basra and they went out to cease her. Khutluk got medicine for the caliph and brought it to the Haje.

Khutluk was asked by Ahmed to bring Asife to the plain of nomadic. Pehlivan was doubtful about the soldiers of Asife but he was calmed down by Haje. Meryem was taken by Pehlivan to the house of Leyla and began to talk to her. Leyla said that he wished to murder Dai but Pehlivan pacified her and asked that the caliph would get better shortly. Atif inquired the doctor about the caliph but the caliph did not tell him where the caliph was. So, Atif killed the doctor.

The secret agents of Atif tried to get into the plain as merchants but the gypsies did not let them enter. Atif believed that the gypsies were trying to hide anything. Leyla said that she believes in Adnan and will not do any mischievous thing because the caliph will get better shortly. Then, Pehlivan purchased some handkerchiefs from the bazaar and set out to the spoon shop. Mansur was asked by Ahmed to write his poems. Quickly, Ahmed moved to the palace and told Atif that Asife had hidden the caliph in the dervish lodge.

Adnan was rewarded by Atif. Instantly, Atif set out his soldiers. Necip distributed the poisonous buns of flour among the people of the Sazlik district therefore the people were becoming ill. however, Shahsuvar was finding the reason for what happened to people. Meanwhile, Necip was also becoming ill so, Shahsuvar helped her. Atif with his soldiers moved to take the caliph from the dervish lodge. Haje was asked by Ahmed to surrender but at that time caliph said that whatever he did, Atif had to pay.

Episode 20 will appear here with English subtitles after release

Episode 20 will appear here with Urdu subtitles after release