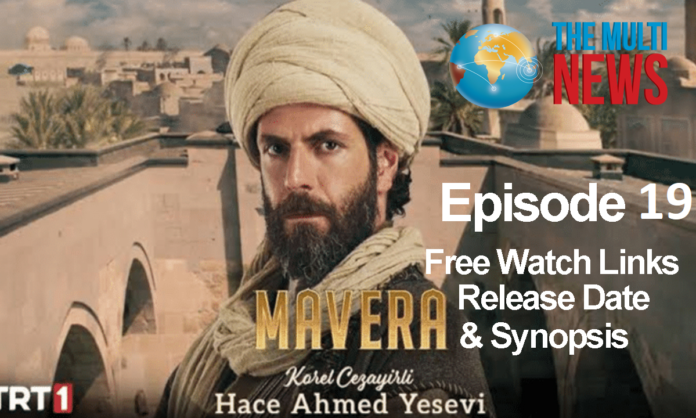 In Mavera Episode 19, Mahmud came back from Baghdad and began to go to the shop for eating. Ekfan met them and told them that Haje with Hemedani came to the city. Shahsuvar came to know that somebody had given some bags of flour to the district of Sazlik. Dai also informed that Hemedani has come to the city of Baghdad. Hemedani was narrating a story to his pupils, then Saltukh and Mahmud arrived in the dervish lodge. Hemedani told that the wound in the heart of Saltukh would cure shortly.

Hemedani left the dervish lodge for Ahmed and set out. Mervan moved to the palace and informed Atif about the arrival of Hemedani in the city. Mervan made his lodge and get his new followers. Adnan was asked by Leyla to invite Nejat to his home for giving him poison. The men of Dai took Adnan to the secret place. Adnan said that Nejat would be poisoned by Leyla.

Asife told that he did not argue with Atif anymore. However, Atif said that the doctor had given a secret medicine and Asife could not leave the palace.  Ahmed with his companions visited the neighborhood of Sazlik and moved to the nomadic plain.  Ahmed told his friends about the realities of Akboru and he called Yalgiz. Ahmed said that he would resolve the issues of Akboru and Yalgiz and Pehlivan was asked by Ahmed to train them. One of the Bedouin soldiers was killed by Sedat.

Other traitorous soldiers were killed by Dubeys and they talked with the tribe leader. Haje came back to the dervish lodge and narrated a story to dervishes about Arslan Bab. Later, Ahmed handover the Dervish lodge keys to Mahmud and asked him to take responsibility for it. Nejat started to drink with Leyla in her house. Nejat compelled Leyla to drink because he thought that there was poison in the glass. When Mahmud was about to close the dervish lodge, Asife came with her father and asked for help from Haje.

Episode 19 will appear here with English subtitles after release

Episode 19 will appear here with Urdu subtitles after release

multinews - October 31, 2020 0
A seven magnitude powerful earthquake has struck off Turkey's Aegean coast and North of the Greek island of Samos.  According to reports, the epicenter of...