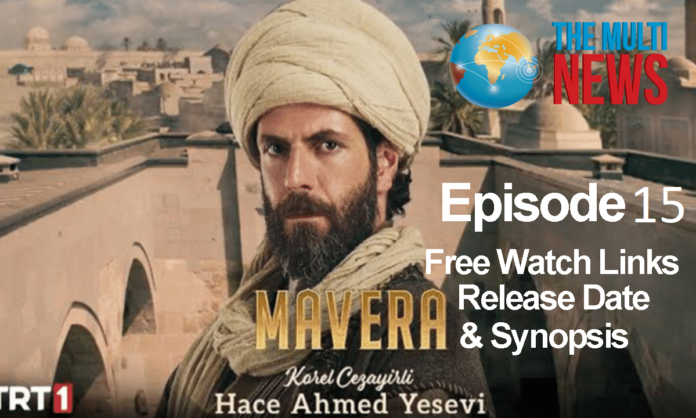 In Mavera Episode 15 , Nejat covered his face and went to converse with Ahmed in the dungeon. Ahmed asked him who was Nejat because Ahmed had seen him for the first time. Nejat replied that but I knew about you and said that he would demolish the legend of the sword of wooden. Shahsuvar reached to the shop of Haje and attempted to open the chest that he had got. Ahmed came to the palace and told that the friend of Ahmed had stolen his chest. Atif met with Dai and he came to know that he had to demolish the district of Sazlik.

Concurrently, Shahsuvar with the help of Mahmud opened the chest cautiously. Pehlivan went to the shop of spoons and there he saw that papers were releasing out from the chest. Pehlivan told that these papers would be out of order now because the caliph was not well. Saltuk approached the private military base and saw their dead soldiers. Saltukh entombed every soldier and decided to take revenge. Soldiers brought out the soldiers from the dungeon so that they could cut woods.

When the captives come back to the dungeon then Hursev attacked Ahmed but in his act, he died. Ahmed tried to Help Hursev because he felt that there was anything bad happened to his lung.  Akboru realized that Necip was worried and for a moment he conversed with him. In the jail, Ahmed talked with many other prisoners and asked them to chose the right path.  Pehlivan came to the house Leyla and asked her about his plan. Firstly, Leyla forbade him from doing such dangerous acts but later she started to take interest in his plan.

On the same night, Atif also went to the house of Leyla and began to drink there. After the enjoyment, Atif left the house but Pehlivan stopped Atif in the lane. Pehlivan revealed papers out of the chest and asked him to set free Ahmed. But Atif denied. later Asife came to him and also warned him. Pehlivan with his all merchants moved to the palace on the next day. After this, Ahmed was liberated soon.

Episode 15 will appear here with Urdu subtitles after release

Nazir Hussain - October 2, 2020 0
How Can Masks Increase Your Immunity? Even though everything is getting back to normal, still wearing masks has become a part of our lives. You...