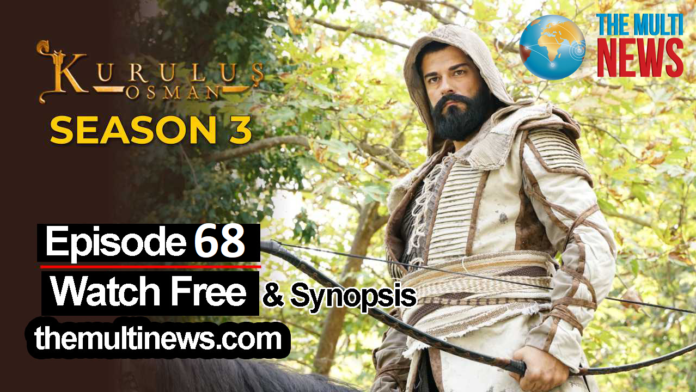 Kurulus Osman Episode 68, Boran talked with the soldiers of Catalan and he quickly went to the tent of Osman. Borak told that soldiers were working for kosses. then Osman asked kosses to stroll around the tribe. Osman brought him to the tent of captive soldiers. Kosses listened to the soldiers and he told them that it was just a trap by someone. Osman asked that all the truth will reveal and he will set free the soldiers.  During this, Kuthan reached there and was informed that Turgut was caught by Nikola. Immediately, Osman asked the Gunduz to reach the castle.

Meanwhile, mercenaries were being followed by Cerkutay. Andreas opened the wound of his arm Gregor and bring out a somewhat tiny thing. But Gregor told that he had to keep this secret. Rogatus devised a plan with Anselmo to arrest Turgut. Osman made a plan of trapping to take back Turgut from Nikola. during this, kosses and his sister approached the castle. Nikola told that he would take revenge on the behalf of Mari.

On his way to the castle with Turgut, he was stopped by Anselmo. He informed kosses that he wished to assist him. Secretly, Mari gave a dagger to Turgut. After some time, kosses was attacked by Anselmo. But during this, Turks approached there. Turgut tried to run out but he was captured by Anselmo. Ragatus came to the tent of the soldiers of Catalan and there he arrested Turgut. Later, Rogatus went to the camp of Osman requested Gregor. That night, Osman talked with the sheikh. the next day Osman went to take the exchange and gave it to Gregor and took back Turgut.

Firstly, Turgut was grateful to Osman. But after that, he asked Osman not to meddle in his matters. Osman was conducting a meeting with other soldiers that night when the priest Gregory reached there. Everything was part of the plan of Osman because he had seen that Gregor was putting something in his Bible secretly.