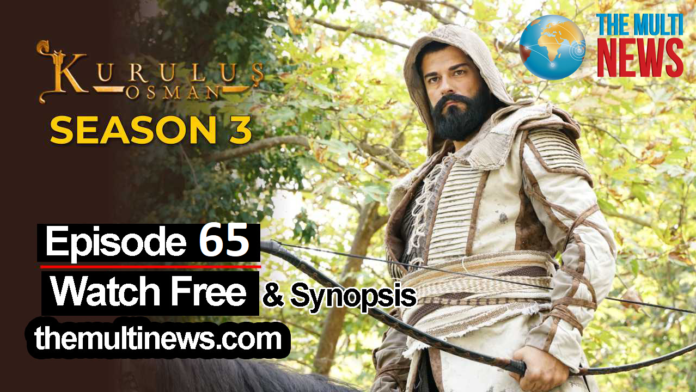 In Kurulus Osman Episode 65, After the death of Ertugrul Ghazi, Osman was nominated as the new chief of Turks. After being the leader, soon Osman started to fulfil his father’s trance and will. Firstly he took action against the empire of Byzantine. Osman lost his favourite person Bamsi Bey while combating with the Byzantine lord, Nikola after his father. Later Osman came to know that his uncle Dundar was a collaborator and he tried to eradicate him.

The spies sent by the pope reached the camp and they started collecting information about the Osman and Turks. Osman used these spies to bring out his uncle Dundar from the castle of Nikola and as a punishment, he executed him in front of the public. After a little late, Umur and his daughter Malhun came to the border area. There were some problems between Osman and Umur but these problems were resolved with time.

Nikola and a very talented commander of his made a great plan to completely destroy the Turks on the border area after talking with the emperor’s son of Byzantine. To unite all the Turks in the border area and to have a son Osman got married to Malhun, the daughter of Umur. Nikola and all his Byzantine armed forces attacked the Turks. Osman used his all soldiers intelligently and eliminated all the Christian military and came back to his tribe with great conquest.

Soon Malhun had a baby boy and he was given the name Orhan by Osman. In this way, he became successful in fulfilling the dream of his father. This television series has starting its shooting after long summer vacations, and this series was well awaited by viewers around the world. It is announced that the television series will be on air on Wednesday, October 6 at 8 pm. Turkish time, in the trailer videos given on the official social media accounts of Kurulus Osman.

multinews - January 24, 2021 0
Government of Pakistan Approves Russian Vaccine Sputnik V For Emergency Use The government is vouching in favor of another vaccine against coronavirus under “emergency use...