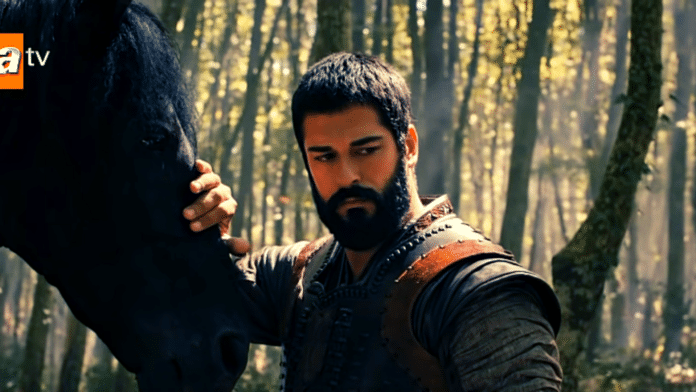 Osman Bey tried to get information about Monke from the Mongolian soldiers, but nobody spoke. Using the body of Kuzgun, Yavlak Arslan set up a trap, and Osman Bey was injured in his leg. Ertugrul Bey released Hazal Hatun but warned her one last time about Arslan. Flatyos realized that it was the Turks who stole the Byzantine gunpowder and took action that night to get revenge. While Dundar and Hazal were speaking in Sogut, Flatyos blew up almost the whole of Sogut. Ertugrul Bey ordered that the wounded ones in Sogut be helped, and every destroyed place will be rebuilt. Savci Bey received a message from the spy at Inegol Castle and learned that Flatyos was guilty. Goktug began to prepare the plain’s Alps for war. That night Savci Bey and the several Alps secretly went to Inegol Castle and killed Flatyos’ soldiers.

Flatyos and Nikola thought about how the soldiers in the castle died and investigated whether the Turks had sneaked into the castle. Cerkutay finally reached Konya and entered Geyhatu’s palace. While Geyhatu was about to kill Cerkutay, Cerkutay said that Osman Bey kidnapped Monke and killed the Mongolian soldiers. Geyhatu was very angry with what he had learned and said that he would kill Osman Bey to regain his honor. Osman Bey came back to the plain and told his brother that Nikola was not guilty. Savci Bey did not believe Osman Bey and said again that the Byzantines were guilty. Osman Bey said Kuzgun was actually working for someone else. The two brothers started arguing, and soon the argument turned into a fight. Osman Bey and Savci Bey fought in front of all Kayi people, but Savci Bey lied about what happened.

That evening, Ertugrul Bey and his entire family ate together. Ertugrul Bey learned secret intelligence before dinner. Ertugrul Bey said that Geyhatu and the entire Mongolian army will come to Sogut and want to send an envoy to Geyhatu. Osman Bey said he wanted to go as an ambassador, but Ertugrul Bey gave this task to his other son Savci.

Nazir Hussain - August 6, 2020 0
Young Bangla, the youth group of the Research and Information Center or CRI of the Awami League research wing, is organizing the concert at...