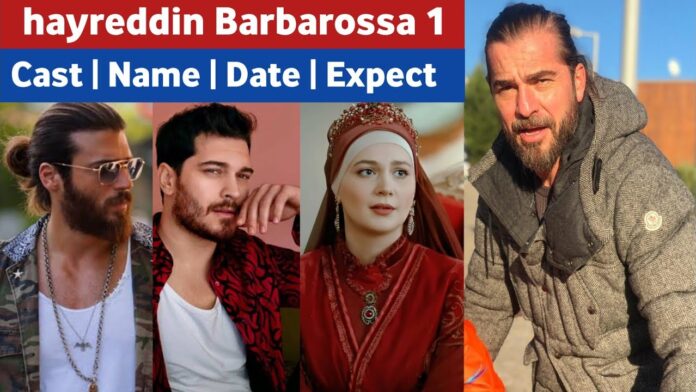 Hayreddin Barbarossa is an upcoming Turkish TV series that is produced by TRT productions. In January 2021, this Turkish new series will be on air. The shooting of Hayredddin Barbarossa began in July 2021. The first promo of this series has released and it’s believed that soon within a month the episode of Barbarossa will also be released.

” The life of the splendid hero of Islam, Hayreddin Barbarossa is reflected in this series. Hayreddin was the captain of the navy of Ottomans and is named as the Mediterranean Lion.”

Cagatay Ullusoy was selected to perform the role of the protagonist. As he was fond of working on the lives of two great brothers named Hizir Reis and Aruj Reis. However, the producer had postponed the shooting of this series due to the pandemic of Covid- 19. Therefore, Cagatay Ullusoy discontinued work for this series But this is proved good for Engin Altan’s Fans.

Because now the Engin Altan is selected by the management and director for the main character role of Aruj Barbarossa. Also, Engin Altan said that he was ready to play this leading role in the series so, he contacted to perform this series. Hyreddin Barbarossa has four or five seasons. Many of the scenes of this series filmed inside the water which is quite attractive.

Engin Altan also told his fans that he is growing his beard to work on this project. The appearance of Engin Altan will be quite different and new as he is increasing his beard and the colour of the beard will be red same as Barbarossa. We believe that this Barbarossa series will even cross the record of Dirilis Ertugrul.

Who was Hayreddin Barbarossa?

Ottoman navy’s main strength was Barbarossa as he expanded the ottoman empire. Many fields were conquered by him. He uprooted the oppression of the disbelievers therefore, he is famous as the name of the lion of the Mediterranean.

Barbaroossa’s real name was Aruj Reis. He was called Barbarossa due to his beard in Red colour. Aruj Reis with his brother Oruc Reis went to many operations. Algiers was attacked by the Barbarossa brothers in 1516 and freed the country from the state of Spain. Later, they gave the occupied land to Selim 1 and therefore, Algeria becomes a part of the empire of the Ottomans.

Barbarossa fought many wars and overcame his enemies in every situation. He was the symbol of terror and honour for both his companions and enemies as well. When he died, Turkey announced that ” The Lord of the Sea has died”. Barbarossa is still given the honour in Turkey that in 2019, during the Drill of Naval, the battleships of Turkey paid tribute at his mausoleum.