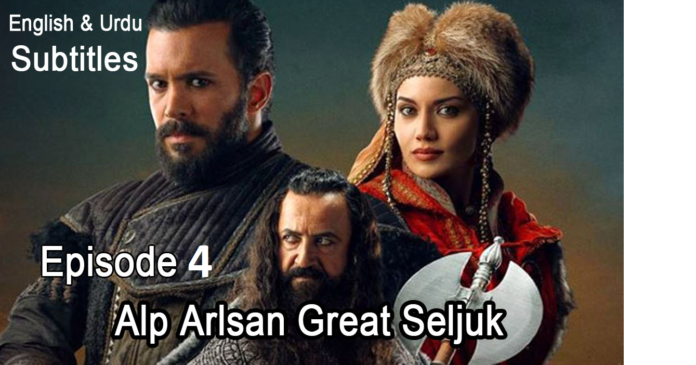 Sultan Alp Arslan Episode 4,m While Akca was trying to figure out who had entered her tent, Hassan arrived. Akca recalled the events that had happened to her years ago and realized that Hassan was her real father. Alparslan found Yannis’ medal next to the corpses and immediately went to the castle. Kekaumenos let Alparslan in and began to listen to him. Alparslan said that the Byzantines broke the peace treaty, and the Turks were killed. The lord was very surprised at this and said that the Byzantines were innocent.

Alparslan said he would find the murderer no matter what and returned to the tribe without showing the evidence he had. After the funeral, Alparslan spoke to his father and said that Yannis was guilty. Lord asked Evdokya to go to the Turkish palace as an ambassador. Alparslan immediately went to the palace and showed Yannis’ medal to the Sultan. Soon after, Byzantine envoys came to the palace and told Tughrul that they knew nothing about the massacre.

Evdokya said the medal was not enough evidence to accuse Yannis and set off to return to the castle. Alparslan asked the Sultan’s permission to bring Yannis to the palace and returned to his tribe to make a plan with his soldiers. Lord learned what the Sultan had said from his envoys and asked Yannis to settle the matter immediately. Diogenes realized that Dukas was trying to hide the truth and said he would tell the emperor everything. Alparslan received information about the slave traders going to Vaspurakan from Akca and took action the next morning with his soldiers.

Bozan understood Alparslan’s plan and sent a secret message to the Lord. Alparslan entered the castle in a prisoner car, but the Lord began to look for him. Byzantine soldiers captured some Turks, and Yannis began to question them. Alparslan saved the Turks from Yannis and tried to climb the wall to escape from the castle. Dukas saw the Turks trying to escape and caught Hassan.

Episode 4 will appear here with Urdu subtitles after release