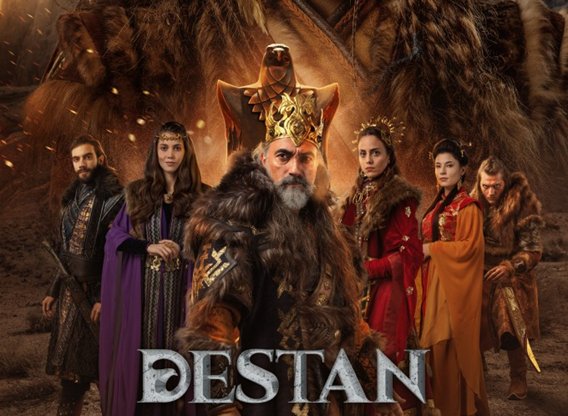 Destan revolves around the story of Akkiz and Batuga who developed love feelings for each other. The concept signed by Bozdaģ Films, became one of the most watched Turkish heroic adventure series. It was quite successful in the first season. The drama consisted of brilliant acting, fantastic fights and horse scenes. Its first season ended with 27 episodes. The main subject of Destan was a story that took place in the 9th century before the Turks accepted Islam constitutes.

Akkiz was screened as a strong female character, who falls in love with a disabled Prince named Batuga. Alpagu,the great Khan of the Gok Khanate,assumed his wife was a betrayer and assassinated her. He took  the lives of numerous innocent people during this time at Dag. Akkiz  who was burning in the fire of revenge for her massacred father. Akkiz became famous as the double-headed wolf to be her paw and ambushed an attack on Alpagu’s caravan. Batuga found it better to not open his mouth to protect his life, and Khan agreed to let him stay in the castle. Ece created secret plans for Kaya to make him the new Khan. Temur did his best to help his father, but because he fell in love with Tutkun, he departed from the castle for some time. Batuga for another time managed to run away from the castle and found Akkiz. Batuga said he would get the  Turks together and struggle to halt Balamir. Balamir eliminated his fights  and joined his brother’s army. After a long time, the ruthless Itbaraks reappeared centuries later to avenge the Turks.  Batuga struggled to defend Turks from the Itbaraks. The death of Saltuk changed Colpan’s mind and she decided to serve the Khan. Thanks to his sons, Alpagu got rid of the danger of the Itbaraks. After Batuga came back to the castle, he married Akkiz and a wedding feast was held for their celebration.

The release date of the Destan Turkish Series is not yet announced. However, It is expected that the new season will premiere somewhere between Septemberand October. In the second season, the concept will focus on the efforts of the throne, the battle with China and other unexpected enemies.Moreover, it will emphasize on how Turks met with Islam.

Ashif Naveed - August 7, 2020 0
A dozen of the French-Polish director's nominations had divided opinion in France, a country where the #MeToo movement that inspired women globally to put...