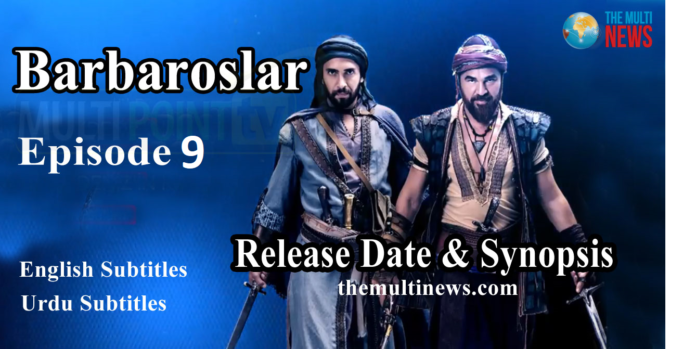 Barbaroslar Episode 9, As Khizir was about to run away with the book, Pietro came back to his room and stopped him. Khizir saw that Niko was injured and began to run away without the book to save his friend’s life. After Oruj got rid of Radko, he found Khizir in the forest and they tried to go to Alexandria together. Pietro said that Esther’s abduction was not important and prepared to go to Alexandria.

Kilic warned Oruj about his attack on Kalymnos. Dervish went to talk to Esther but said she was not Suleiman’s daughter. While Oruj and Khizir were looking for a new solution, Dervish began to tell them that engineer Muhammad had a crucial role. Pietro arrived in Alexandria and ordered Sylvio to find out about Muhammad’s whereabouts. On his way to Hayrabay’s base in the forest, some bandits attacked Oruj. Meanwhile, Pietro’s soldiers attacked Hayrabay and captured Muhammad.

Oruj saw Muhammad was abducted and some of his friends were killed. Oruj learned that Jafer was responsible for this incident and cut off one of his fingers to make him talk. Oruj then immediately went to Kilic’s house and once again asked him for a ship. While Kilic was saying that such a thing would not happen again, Dervish came and started asking Kilic questions. Kilic changed his mind and said that he would give Oruj a ship to take Muhammad back.

Pietro prepared to go to Karpathos with Muhammad and asked Sylvio to send the warships belonging to Unita. Oruj and his sailors were prepared in a short time. While Pietro was telling the soldiers on the island that they should go to Rome as soon as possible, Oruj’s soldiers came out of the forest and started attacking with arrows. While Pietro’s soldiers were about to win the war, Burak came to the island with the Ottoman fleet and started attacking the Christians. Pietro fled to his ship, but Khizir attacked him and threw him off the ship.

Episode 9 will appear here with Urdu subtitles after release

Afreen - December 3, 2020 0
Uyanis: Buyuk Selcuklu Episode 11 Release Date and Synopsis and How to watch with English and Urdu subtitles Free of cost