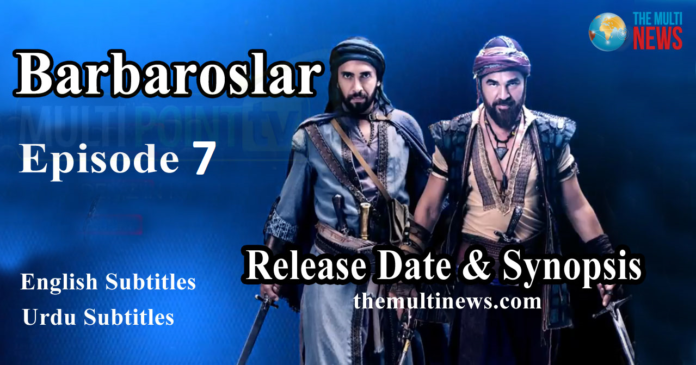 Barbaroslar Episode 7,Anutan began to fire on the ship of oruj. Once again, Jafer attempted to blast the gun powder barrels by using the firing on the ship. Oruj was trying to protect the ship but a huge explosion is made and the ship began to sink. Anutan considered Oruj the dead and returned. Khizir was captured by Radko and Radko brought Esther. After the blast, Oruj met with Ilyas and move to an abandoned place with the alive friends. Sylvio told that he was going to murder all the children in the children’s orphan home to take back Isabel.

That night an unknown person, murdered the soldier of Mamluk in the lodge. After getting up, khizir went out to search for Esther. He came to the house of oruj. Isabel called khizir in his lodge and told him that the ship of oruj was blasted. But khizir told him that his brothers are not dead and demanded help from him. Later, khizir informed Ishaq about what was occurred with Oruj. khizir went to the house of Kilic to ask for his assistance in this matter.

Firstly, Kilic communicated with Sahin and after that, he went out to the house of oruj. Oruj began to search the things on the ship with the help of the ship of Kilic. Radko bought the book and Esther to the Kalymnos island. Pietro inquired about Esther but he was unable to know anything regarding the book. Later Pietro came to know about what Anutan had done. So, he sent his soldiers to search the dead body of Oruj. During this, Oruj daydreamed about the sultan Mehmet’s faith.

And quickly he got up. He began to swim in the sea to search for a raft. Khizir and Sahin reached a village and there they investigated villagers about Oruj. Oruj was bringing Ilyas in the ship which he found there. Then, some pirates reached his island and attacked both. Khizir viewed this islet from a distance. But Sahin asked him that they would not be moved there. Later, the pirates’ leader reached there and asked that he would murder oruj.

Episode 7 will appear here with Urdu subtitles after release

Nazir Hussain - September 29, 2020 0
The way you start your day predicts how far you will stand. Morning rituals are a great way to set the productivity tone for...