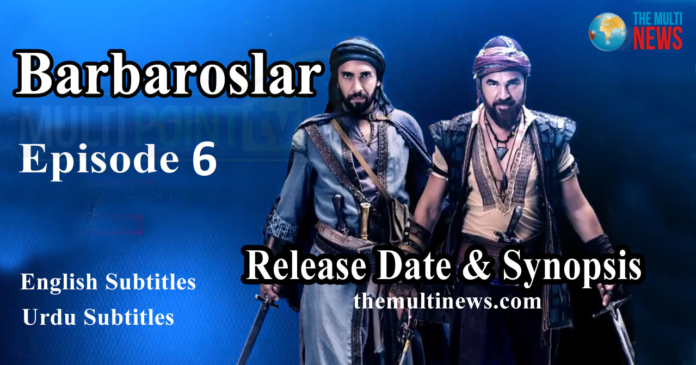 In Barbaroslar Episode 6 , Jafer was about to blast the ship, but at the spot, Oruj stepped into the depo of the ship. He stopped Jafer to do this. Radko was trying to move to a protected place to protect his ship. Pietro made a dinner for Anutan where he showed the soldiers which he wanted to give him. On the next day, Zaynab was trying to reach the orphanage, then khizir started to search for Esther privately. Oruj talked with his fellows to disclose the secrets plans of Esther. Khizir was searching for Esther in the bazaar and Radko assaulted him. But Radko failed in his plan.

Pietro told that Anutan will use the name of black buccaneers and all the Muslims in the Mediterranean were scared by him. Although, Aunutan did not understand the plannings of Pietro he agreed to his plan of killing Oruj. Golem moved to the office of Sylvio to provide some documents to Isabel. Also, he gave a private message to Isabel. That night, Radko reached the office of Sylvio and planned to attack khizir.

Quickly, Isabel went to the house of oruj and notified Despina. The assistants who came into the house were killed by Khizir. Again, Khizir started to look for Esther. Ishaq was moving to the orphanage with Despina and some of the men of Sylvio assaulted him. Some of the new soldiers of Antuan quickly moved to attack the ship of oruj. Oruj learned that some pirates were approaching him. So,  he warned his fellows. The pirates’ attack was unsuccessful.

One of the pirates was caught by Ilyas and he came to know from him that some other pirates were attacking a village of Muslims. A chief met with Pietro and asked him that he would complain to him in front of the Pope. But Pietro murdered that cardinal so that his plan would not fail. Finally, khizir find Esther and informed him that he was a friend of Suleiman.

Esther with khizir moved to the orphanage. On the way to the forest, they were attacked by Radko. Radko said them he will kill both. The sillage of Muslims was saved by oruj. Oruj came back to his ship. When Antuan saw him returning, he ordered his men to shoot on the ship of oruj.

Episode 6 will appear here with Urdu subtitles after release