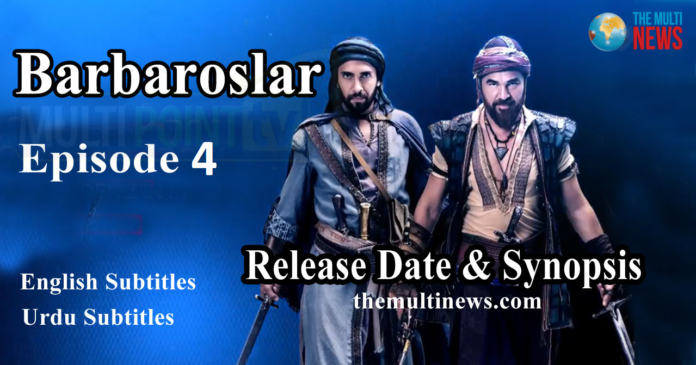 In Barbaroslar Episode 4 , Ishaq was saved by Oruj and he was helped by Oruj to murder Poseidon. Ishaq got injured but he told that he was leaving for Lesbos and went out with Khizir. Oruj was disturbed by what Ishaq asked. So he came back with Ilyas to Alexandria. On seeing the dervish, Pietro got surprised that he was alive. Sylvia was ordered by Pietro to chase Zeynab and the old man.

Pope sent a message for Pietro and the message was conveyed by Radko. Quickly, Pietro attempted to arrest Ebu Muhammad an engineer. Oruj appreciated oruj at the seaport for his bravery. However, Sahin was not feeling good in such conditions. Ishaq went to visit the grave of his family. Then he moved to arrest Yorgo. Yargo told the reason for hating Ishaq and his family members.

On the seashore, some fisherman found the body of Poseidon. So he brings him to a doctor. A buccaneer recognized that he was Poseidon’s body. A man of Pietro ordered the pirate to arrest the engineer Ebu Muhammad.  Later he came to know that the engineer was not found anywhere. Oruj was asked by Hyarabay to search the man.  When oruj came to know the reward of this task, he went out to search for him.Zeynab and hamza moved to Midilli.

But Radko was informed about this by Jafer. Radko came to know that Suleiman was living in Lesbos, so he went out with his soldiers. Later, oruj met with Theo and made a get up like a merchant of Christian. And he went to the ship of pirates. Muhammad was rescued by Oruj from pirates and came back to his ship. When Rdako saw Khizir on the way to his home, he attacked him. Oruj came back to his ship and learned that his ship had been caught up by Sahin. Sahin said to Oruj to return the captured man and carried his ship.

Episode 4 will appear here with Urdu subtitles after release

Afreen - January 30, 2021 0
Kurulus Osman Episode 44 Release Date and Synopsis and How to watch with English and Urdu subtitles Free of cost