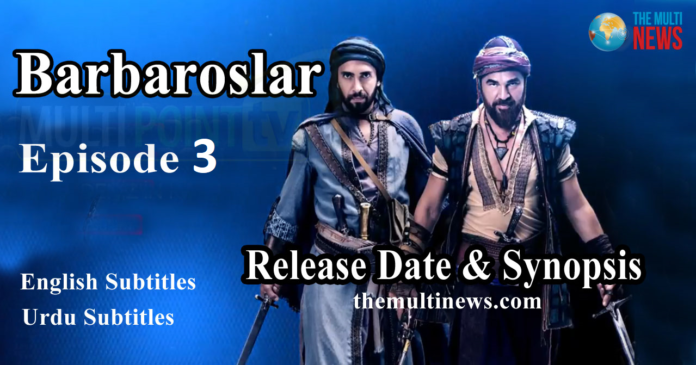 In Barbaroslar Episode 3, The slaves were attacking Oruj. But oruj ceased them. ilyas was protected by oruj. To protect their lives, Zaynab and khizir jumped off the rocks. Radko struggled to capture zeynap and Khizir. But they both succeeded to escape in a boat. Pietro met with Shehzad Murad to arrest the fled Turks. Shezade told that his necklace was stolen by a man. Cafer was warned by oruj.

Because the plan of Oruj was failed. Later, he talked with the son of Kilic privately that night. Khizir visited the shop of Suleiman with the stolen necklace and informed him about the whole incident in Kalymnos. Then, Khizir went to the house of Ishaq. There he saw many dead bodies and felt that something bad had happened there. The note was read by Khizir that Poseidon left there. Later he went out with Niko. Ishaq was taken by Poseidon to a close island. And he planned a trap there.

Oruj came to know that Despina was expecting. Then he went to communicate about the job with  Isabel. When they were talking with each other, Golem arrived there. He informed them Ishaq was kidnapped by Poseidon. A ship of Unita was given to him by Isabel to help oruj. When Pietro was finding Eyub, his son was found. He started to do the practice swordsmanship with his son.

In a short time,  Eyub reached there. He informed that the book was in the hands of Suleiman to protect his son. When hamza was taking off from Pietro, he was killed by Eyub to keep his secrets safe. Sylvio got angry with Isabel when he gave the ship of Unita to Oruj. Then he talked with Pietro.

Niko and khizir were reached privately at the place where Poseidon was living. Oruj and his soldiers reached the island and began to murder the pirates. Khizir was captured by pirates when he was entering the cave. Khizir asked his brother that everything would be fine after the war in the cave. After some time, Oruj won the war and Poseidon was killed by Ishaq.

Episode 3 will appear here with Urdu subtitles after release