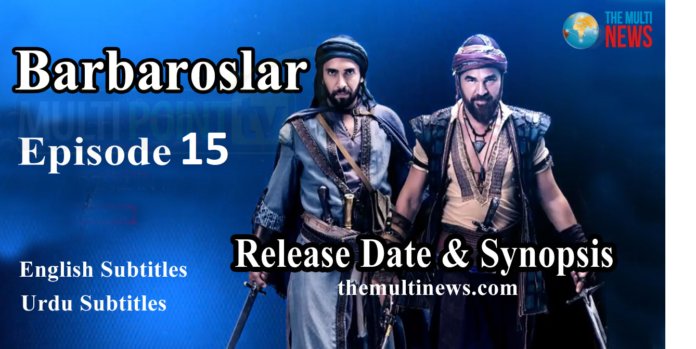 Barbaroslar Episode 15 synopsis , Antuan gave up killing Ilyas and set sail with him. After speaking with Emir, Oruj tried to find Ilyas but realized that they had already left. Sahbaz set a trap for Oruj to stop him, but he was unsuccessful. After speaking with Isabel, Oruj checked the ship in the north port but found no one there. Oruj later returned home and sent a message to Ishaq. Ishaq asked Piri to send a message to the spies in Kalymnos and set off for Alexandria. Oruj forbade Sahbaz to leave the inn.

Later, an emissary of Pietro came and told the necessary conditions to release Ilyas. Oruj sent the messenger back and accepted Meryem’s plan. Antuan took Ilyas and the chests full of gold to the island Pietro had said before. Pietro said that he would use Ilyas to stop Oruj and even start a great war in the Mediterranean between Turks and Christians.

Meryem went to the castle and surrendered to Pietro. Pietro invited Meryem to dinner and asked her about her childhood. Meryem did not answer these questions and went to her room to rest. Pietro met a Venetian man that night and told him his plans for the Mediterranean. Leonardo asked Pietro for Ilyas and in return said that he would unite the Christian states. Meryem learned about Ilyas’s location and told Khizir this in secret.

Oruj immediately went to Telendos and began to prepare for war. As Leonardo was about to take Ilyas from the soldiers, Oruj attacked. Oruj soon defeated the Rhodesian soldiers and captured Leonardo. Pietro spoke to Meryem again and said that he had put some things in her room. When Meryem went into the room, she saw her mother’s clothes and finally realized that it was Pietro, the brother she had lost years ago.

Episode 15 will appear here with Urdu subtitles after release