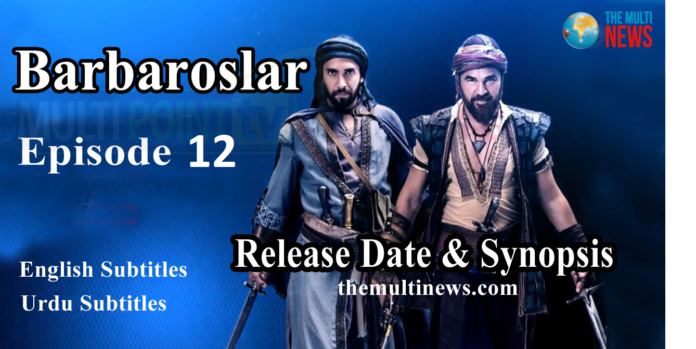 Barbaroslar Episode 12 , As Oruj was about to realize that the man who attacked the cellar was Pietro, Emir came and arrested him. Oruj said the real criminal had escaped, but Emir took him to the dungeon. Khizir went to Dervish’s house and found the secret message. Khizir then went to the palace and said that he wanted to meet Oruj. Emir did not allow him, but Khizir changed his mind by using the bomb in his hand.

Khizir said Dervish was kidnapped and showed the password to Oruj. Pietro spoke to Shahbaz and immediately asked him for a ship to take the barrels to Kalymnos. While looking for the barrels, Ilyas saw dead soldiers. Later, Emir’s soldiers came and arrested Ilyas. Ilyas went to the dungeon and told Oruj that he was innocent. Oruj made a deal with Emir to save Ilyas. The Emir gave Oruj a day to bring the gold and the real murderers to the palace. Oruj immediately went to the port and stopped Shahbaz.

Pietro devised a plan to transport the gold dust more easily and asked Sylvio to find a goldsmith. While Sylvio was talking to Rakel, Isabel saw him. Isabel then killed her father’s men and fled the inn. Isabel told Oruj that Rakel was going to do something with the gold dust. Khizir learned that a shepherd had brought Dervish’s ring to Alexandria and immediately took action. Oruj went to Rakel’s workshop but found nothing there. Oruj later caught up with Rakel and learned from him where Pietro’s gold was.

Pietro said Diego was a traitor and killed him. Antuan said he would bring Khizir to Pietro to save his life. The next morning Antuan took Meryem and Khizir to Pietro. Pietro asked Khizir for the book, but Dervish told him not to do it. Oruj caught Alfeo, but as he was about to return to the palace, Sylvio stopped him. Emir said that Oruj’s time was over and ordered Ilyas’ execution.