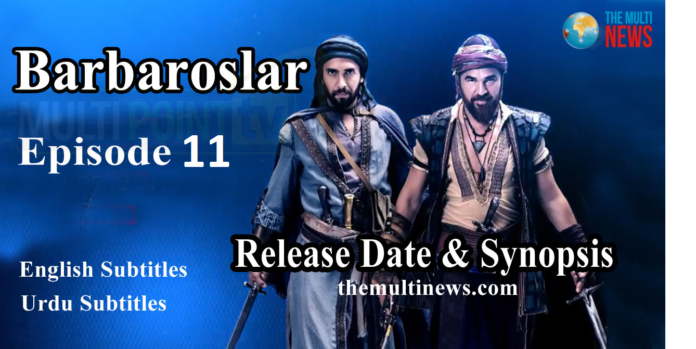 Barbaroslar Episode 11 synopsis, Diego and Antuan attacked Khizir, but a woman helped them escape. Antuan shot Khizir with a poisoned arrow. Ilyas tried to save Despina, but she died. Pietro tortured Oruj to find out where the gold was. Pietro later learned of Despina’s death and continued to torture Oruj. The poison spread well into Khizir’s body. Meryem took him to a cave and prepared a medicine for him.

After Khizir was healed, Antuan attacked once more, but Dervish’s men rescued them. Ilyas found the place where Oruj was and went inside to save him. Pietro fled from there so that his identity would not be revealed. Oruj learned that Despina had died and immediately went home. After the funeral, Oruj said he would avenge Despina. Meryem and Khizir arrived in Alexandria the next day. Meryem saw her father Dervish for the first time in years.

Meanwhile, Emir came to the port and said that Dervish had stolen Sahbaz’s ship. Oruj stopped Emir, but the Emir’s wife attacked Meryem. A woman stopped Emir’s wife. This woman was Oruj’s aunt. The Emir returned to his palace so that there would not be a big problem between the two states. Oruj said that he bought a big house with the money he saved to buy a ship and that he would live there from now on.

Pietro made a plan with Shahbaz to get the gold back. Shahbaz told Emir that Oruj had a large amount of gold in his hand. The Emir’s soldiers learned where the gold was, and Pietro immediately took action. Meryem answered Khizir’s questions about the book and told him that they had to go to the library of Alexandria. While Pietro was trying to get the barrels of gold out, Oruj came and attacked him. Oruj caught Pietro and removed the mask from his face.

Episode 11 will appear here with Urdu subtitles after release

Afreen - May 14, 2022 0
Click here to read full news about Kurulus Osman Episode 95 and Release Date free of cost here and watch it later