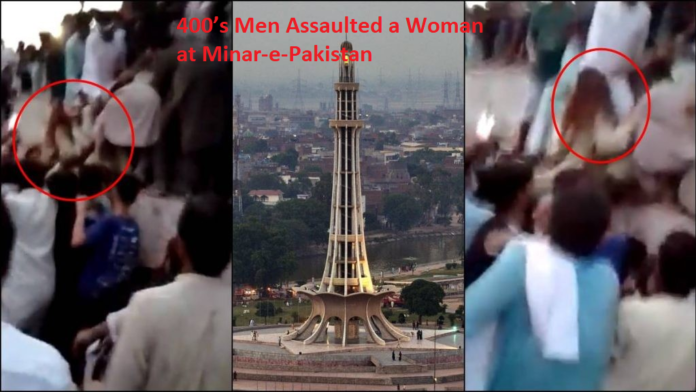 400’s men assaulted a woman at Minar-e-Pakistan. On the 14th of August, during the celebrations of Independence Day of the country, a tiktoker woman was purported and attacked by many people and tossed in the air like a ball by hundreds of men. Pakistani people celebrated their day of independence in the Greater Iqbal Park at Lahore on Saturday. Hundreds of people attacked her and pulled off her clothes. On the internet, a troubling video has appeared about this happening.

The harassed woman is a tiktoker in Pakistan. It was informed by her that she was harassed by many people on the 14th of August during the celebrations of Independence Day. The video of this incident has circulated rapidly on the internet. The media has reported her saying that she was surrounded by hundreds of men to harass her in the greater Iqbal Park which is a popular memorial place of Pakistan and also called as Minar-e-Pakistan house.

The citizens of Pakistan showed anger over this shameful act of men. According to the Dawn News, an FIR over this incident was written and this case was registered against the 400’s men who assaulted a woman at Minar-e-Pakistan on Tuesday by Lahore police. According to the woman’s complaint, 300 to 400 men assaulted her when she was making a video for TikTok with her six friends nearby Minar-e-Pakistan. They tried their best to escape from this crowd but in vain.

It is reported by the Dawn News, that the security guard of the park by observing the situation, unlocked the gate to the place nearby Minar-e-Pakistan. Moreover, the women also reported that my clothes were torn by men and they tossed me in the air. She also told that people looted her jewellery and his friend’s money was also stolen.

According to a report, the woman said that people snatched her earrings, and15,000 rupees. The identity card of his friend was also lost. The Superintendent of Police was directed by DIG Lahore operation Sajid Kiyani to take instant legitimate action against the involved culprits in this happening. He also said that the people who harassed or dishonoured the women will be under the influence of law.

Ashif Naveed - August 7, 2020 0
"There Is No Evil" explores the moral dilemma of those who carry out executions and the consequences of defiance for them and those around...